Every so often a series of books is published by Penguin, which are just so beautifully designed that I want to own them regardless of the contents. They’re not afraid to break conventional rules, and they set the standards for book design. The attention to detail is always spot on, both in illustration and typography, and they perfectly reflect the contents of the book in a classy and sophisticated way.

Mind you – it does help if the subject of your book is classy and sophisticated to start with! We don’t all get to redesign F. Scott Fitzgerald’s novels, or the latest Penguin food series. Not jealous at all!

For anyone interested – click here for a link to the latest book covers designed by their senior cover designer Coralie Bickford-Smith.

Interestingly, I came across her and her latest project a while back through a blog called ‘from the desk of’ where she and her workspace were featured. See it here. This is a great blog that shows the desks or workspaces of creative people from just about anywhere – though mostly in the US I think. It’s a bit random, but there are some really interesting nuggets in there. And I guess some people might find it odd, but personally I find other peoples workspaces fascinating, especially creative people. The desks featured range from in-house at large corporations through to home-working freelancers, and there are mini interviews with the desks owners about their space and work – fromyourdesks.com

However, looking at these creative workspaces always make mine seem extremely dull in comparison:

It’s all very practical: a shelf above my head, which holds an ever increasing amount of books and folders and I always hope will hold okay on the cheap brackets I ‘temporarily’ put up. A small lamp with a natural daylight bulb, which is always on as I have to keep the blind shut so it doesn’t reflect on the monitor screen. The requisite designers Mac, on which I periodically change the desktop pattern/colour, as it’s the thing I see almost everyday, and so I get bored of it easily. I have a swanky white leather swivel chair, my excuse being that I spend a large percentage of my time sitting in it, so may as well get a good one. It has a homemade patchwork cushion on it. And a big notice board that was meant to be for collecting inspirational bits of design and/or art, but typically has become full of boring paperwork.

I do at least have a piece of original graphic art on the wall, it’s a collage by Angie Crowe I bought from the East End Arts Club. It reminds me of the sort of stuff I used to do as an art and graphics student, though never anywhere near as good as this. 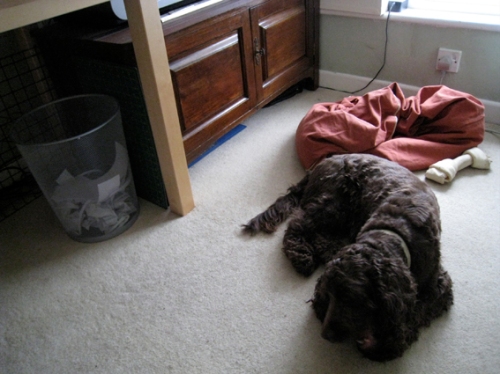 And the best bit of my office? The scruffy old bean bag, rawhide chew, and chocolate cocker spaniel sprawled on the floor.

This entry was posted in Others designers book jackets and tagged designers desks. Bookmark the permalink.